“Prisons have the capacity to intrigue law abiding citizens in the same way that crime fiction and murder mysteries are popular reading.”  Inside Out by Mickey Dewar.

I confess that when I first visited Fannie Bay Gaol, I had a perverse sense of fascination with the darkness of incarceration. How would I cope with being locked in one of these cells? What would it feel like if I was on death-row waiting to be hanged? The more I looked around the site, the more the feeling of the place spooked me. Who was locked in this place and what had they done? How were they treated? What was the history of this site? I wanted to know more!

There is little written about the Fannie Bay Gaol site and this is partly a result of the ravages of time and Northern Territory weather which have destroyed some of the historical records. The best writing I could find was a book by Northern Territory historian, Mickey Dewar called Inside Out published by NTU Press. In it, she reveals some of the social and political history over the life of the gaol. I have also found some fabulous records at the Northern Territory Archives including an original gaoler’s diary, a police inquest book, some photographs and oral history stories from local Territorians who remembered when the gaol was still operational.

Re-capping on my project, I am creating three short animations about three real-life historical ‘characters’ who all spent time in the Fannie Bay Gaol. There will be a brief history of the gaol to give the stories some context. I am using as many original archival photographs and objects as I can find to re-imagine (re-animated perhaps) a little explored slice of Darwin history. I have uncovered so many fascinating facts about the gaol and the people who were locked in there but I can’t fit everything into a short film (!) so I will aim to detail more about the gaol in this blog over time.

Let’s start at the beginning. Fannie Bay Gaol was opened in 1883 with with 31 prisoners, three Europeans, eighteen Chinese and ten Aborigines. Many people in Darwin don’t realise that the Chinese were the dominant non-indigenous population here until around 1911. In fact in 1888 the Chinese out numbered the Europeans four to one. Many had come here to work in the gold fields and their hard labour helped to build and sustain much of the new ‘settlement’ in Palmerston (as Darwin was then called).  The Chinese also brought opium with them from China and this became a serious drug of addiction in the early life of Darwin. Between 1889 – 1911 the most common crime of the Fannie Bay Gaol prisoners was the possession or trafficking of opium.  Sentences for supplying opium were around 6 months hard labor. Occasionly prisoners died as a result of their deprivation of the drug in prison.

I confess that until I started this project, I knew very little about the history of the Chinese in Darwin and I was a little shocked and saddened to read about how they were treated in the early ‘settlement’.

To illustrate the attitudes of the time, it’s probably enough to give a few quotes from Mickey Dewar’s book Inside Out.

“ Leung Ping, the Chinese prisoner who returned to the gaol a short time ago, after escaping from the guard…Since his return he has made two determined attempts to commit suicide, first by refusing all food, this attempt was however frustrated with the aid of a stomach pump. The second attempt partook more of the happy dispatch character. On Sunday last by some means Leung Ping obtained possession of a brad-awl and stabbed himself a number of times in the abdomen, so determined was he to effect his purpose that he held the brad-awl driven in up to the hilt and determinedly resisted its removal. The wounds are not serious. It becomes a question whether it is not rather a mistake to interfere in such an affair as this instead of letting the man finish his case effectually. It would save the Government the expense of feeding and clothing an utterly useless animal.” NTTimes 24 march 1888

“Wanted, a hangman! Inquistive ones are already wondering who will give the ‘drop too much’ to the prisoners under sentence of death in Fanny Bay gaol…Two at least are sure to get off but the two Chinese..These miscreants fully deserve the hangmans’ rope, and the lesson may not be lost on our Asiastic community which badly wants keeping in check.” NTTimes 31 march 1899.

“The degree of civilization in a society can be judged by entering its prisons.”-Fyodor Dostoevsky, from The House of the Dead.

I wonder what Dostoevsky would have thought about Darwin when Fannie Bay Gaol was open?!

Someone recently told me that my style was “Australian Gothic”. I liked the sound of that so I did a bit more research and I thought I’d include this quote from The Anthology of Colonial Australian Gothic Fiction Edited by Ken Gelder and Rachel Weaver. It describes the mood I’ve been delving into so well.

For the colonial Australian Gothic, the bush is invariably a place of settler disorientation and death, as if the promise of settlement can never be fully realised…The colonial Australian Gothic is drawn to primal or primordial landscapes, no doubt reflecting the early sense that even relatively proximate places were – in spite of the rapid development of the colony – still wild and unknown…The genre turns towards precisely those stories of death and brutality that might not otherwise be told in colonial Australia, playing out one of the Gothic’s most fascinating structural logics, the return of the repressed: quite literally, as graves are dug up, sacred burial grounds uncovered, murder victims are returned from the dead, secrets are revealed and past horrors are experienced all over again. In this way, the colonial Australian Gothic gives us a range of vivid, unsettling counter-narratives to the more familiar tales of colonial promise and optimism we are often asked to take for granted. In many cases these strange renditions of colonial anxieties and failure are indeed weird and melancholic; compelling s they are, they can also seem downright desolate and destructive.

The original archives photographs below. 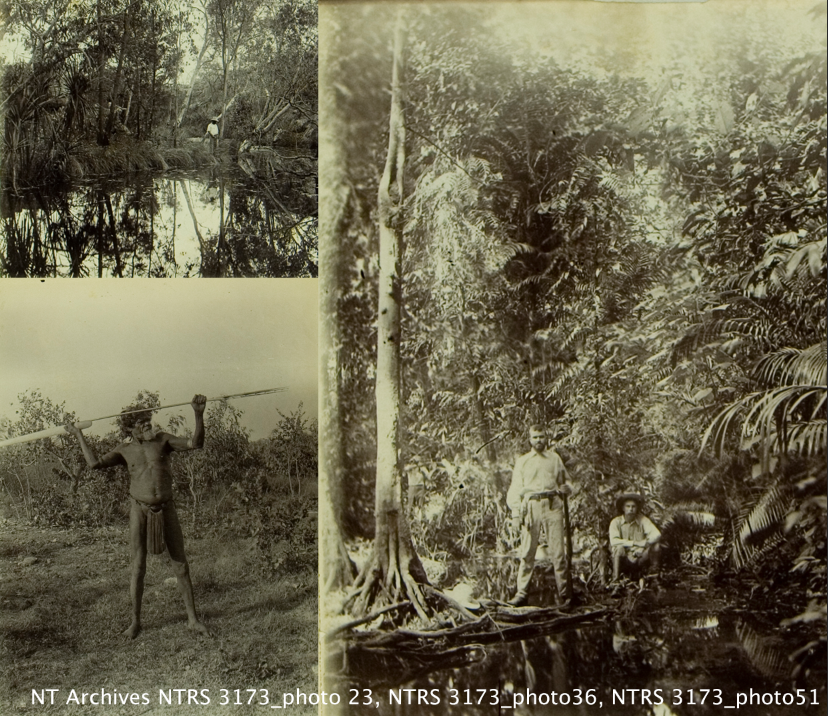 Now this might sound strange but I had a very nervous moment last week when I met my ‘character’ for the first time. I’ve been researching the story of Rodney Spencer for a few months now and I feel like I know a lot about him and let’s just say he’s not a very nice person!

There are no photographic records of  Rodney Spencer in the Northern Territory so I wrote to the South Australian Archives to see if they could help me trace a photograph of him, considering he lived in the late 1800’s I didn’t hold out much hope of finding one. Then to my absolute surprise I received an email from the SA Archives asking me if I’d like to purchase a copy of his (two!) photographs. Hell yes, I was very excited!

This might sound strange but a few weeks later, when I saw the file attachment sitting in my inbox, I actually felt nervous! I didn’t open it straight away. A part of me didn’t want to look into his eyes or ‘meet’ him in anyway. It felt safer having him as just a story, albeit a true story. In some ways perhaps it felt better to have the past at a safe distance. Facing the truth about Northern Territory frontier history has been a very confronting experience. Stories of massacres and revenge killings, coverups and government policies of the early white colonialists has often brought me to tears but somehow reading about these things on paper seems that little bit further away than seeing the people who committed the crimes. Meeting Rodney would make him and the past, real.

Selfishly, I was also worried that he wouldn’t look evil enough to be my dastardly character, maybe he’d just look like an average person. With butterflies and a sort of sick feeling in my stomach I opened the attachment and looked into his face. At first, there was a level of disappointment. He’s not evil enough, he looks ‘normal’. I guess this is the point. Many of the horrible crimes committed in our early colonial days were committed by ‘normal’, average new Australians.

Here he is, meet Rodney Spencer.

And here he is in Fannie Bay Gaol.

I haven’t talked much yet about my artistic process for this project and some people have been asking how I do it. Well I can’t give away too many of my style secrets but here are my basic steps in what has turned out to be a rather complex and time consuming process! (Although I am happy with the result).

I  use the Archives to search for images around the same historical period that I might be able to use to illustrate the stories. Sometimes I get lucky and find photos of the actual characters or actual places which is very exciting (!) but if I can’t find the right historical images then I collage a number of photographs together to create my own artist’s impression. I take the original archival images into Photoshop to firstly create the painterly effects and colourise the photos. I then put the images into a composting and animating software called After Effects where I add lighting and movement to the scenes. These files then get transferred into Final Cut Pro where I put the voice over and soundscapes over the top. It’s certainly not a fast process but it’s very satisfying to see the stories come alive! In the final stages of my project I’ll hopefully manage to learn a new piece of software which will enable me to present the animations in one half of the screen and on the other half of the screen users will be able to click on the original documents, photos, facts and oral history recordings that went into making the films. Boy am I busy!

One of the technical challenges in creating the scenes is that many of the original photos are in a square format but the animations I’m making are in a widescreen (landscape) format so I have to do some creative thinking around how to recompose and extend the original photos into new scenes. Below is an example of what I mean.

The original photograph below had to be extended so I added more landscape around the people.

One ethical problem I’m struggling with is using actual faces of deceased people to represent my characters. I’m trying to get around this by changing the original photos so that the people become imagined characters but I have to confess I still have a level of discomfort around this but I’m not sure what else I could do. I made a character pictured below. Sometimes I wish I had a cultural adviser or a producer to help with dilemmas!